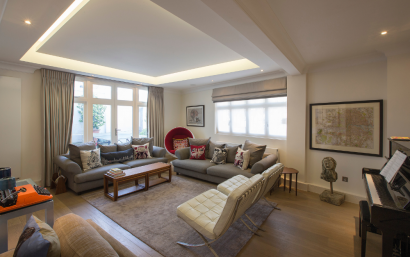 Brought to the market for the first time in 12 years, the elegant white-stucco three storey late-Georgian semi-detached house was originally built in 1825 and has a bright and airy principal reception room and adjoining study, both opening onto gardens. Between 1878 to 1940 the St John’s Wood School of Art was located directly adjacent to the house on Elm Tree Road (the art school now replaced by houses).

Because of its location adjacent to the St John’s Wood School of Art, and the bright and airy reception room and study, the house on Elm Tree Road has been owned and used as an artist’s studio/home by a series of notable artists including between 1881-1886 artist Ernest Parton, between 1890-1895 artists Caroline and Ethel Wright, between 1907-1908 artist Arthur Wellesley Noyes-Lewis, between 1910-1918 artist Miss Maud Earl and most recently renowned portrait painter Joseph Oppenheimer, who lived in the Elm Tree Road house between 1933 and 1953.

Born in Würzburg, Germany, in 1876 Joseph Oppenheimer started doing portrait paintings as a teenager including at the age of just 14 a portrait sketch of German Chancellor Count Otto Von Bismark when their respective families stayed in the same spa hotel. At 16 he was admitted to the Munich Academy where he studied painting. He travelled widely in Europe and the USA before opening an artist’s studio on the King’s Road in London from 1896 and from 1907 taught at the London School of Art. 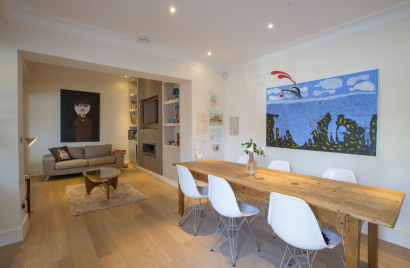 In 1908, upon marrying Fanny, his second cousin, he relocated to Berlin, but he never gave up his love of England, visiting often to paint famous figures from English high society and landscape paintings. His paintings of high society ladies were often used by magazines including The Lady, Tatler and Harper’s Bazaar.

In early 1933, after Adolf Hitler came to power, the Oppenheimers chose to live once again in London, first renting (and from 1943 purchasing) the house on Elm Tree Road, the couple becoming British citizens in 1936 having been sponsored by an equerry of King George VI, Sir Louis Greig (the grandfather of journalist and former Daily Mail editor Louis Greig). 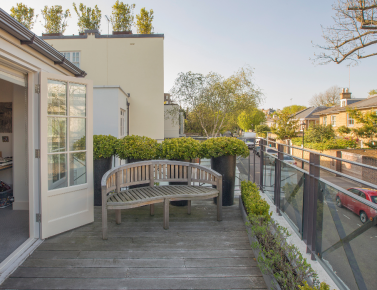 In 1953, when his daughter Eva moved to Canada, Joseph Oppenheimer sold the house on Elm Tree Road and relocated to Montreal. In July 1966 he returned to London for the last time to celebrate his 90th birthday, returning to Montreal after where he died on 31st August 1966.

Now the house on Elm Tree Road which has been the home of several notable artists over many decades is for sale. The ground floor reception hall opens onto the spacious principal reception room which has French doors opening onto a courtyard garden. It is this room that some of the artist owners used as a studio to do sketches and work on paintings. Beyond the reception room is a kitchen, separate utility room and integral garage with direct access into the house.

To the other side of the reception hall is a bedroom suite with ensuite bathroom and a study/home office where Joseph Oppenheimer would do his correspondence and prepare for his talks at the Royal Society of Portrait Painters. French doors in the study open onto a private walled garden. 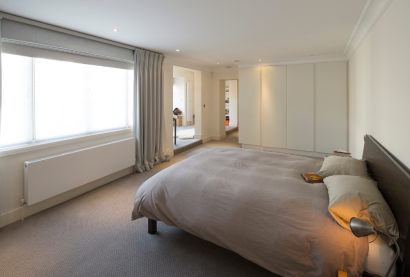 On the first floor is the principal bedroom suite, which has a sitting room, walk-in dressing room and main bathroom, with the sitting area opening onto a spacious roof terrace. There is a second bedroom with bathroom, which also opens onto the roof terrace. On the top floor there are two further bedrooms which share a family bathroom.

Mark Pollack, Co-Founding Director of Aston Chase says: “This notable late-Georgian house represents a rare opportunity to purchase a special home in one of   St John’s Wood’s most desirable locations. The house provides bright and spacious lateral accommodation with the rare ability to access private outside living space on both the ground and first floors. As a rare low-built period house in the area it is likely to be of equal appeal to both young families, down-sizers and potentially to the next generation Joseph Oppenheimer!”

Michael Sulkin, Director (House Sales) at Aston Chase says: “In 2006 the house was granted planning consent for an extension providing a further bedroom with ensuite at first floor level above the garage. The consent expired in 2009 but could be revived and used to create an enlarged six bedroom house should the new owners require additional accommodation.”

The house on Elm Tree Road is for sale priced at £6,350,000 with selling agent Aston Chase.